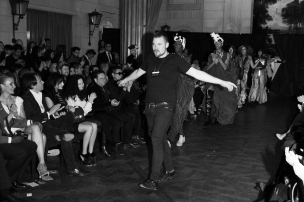 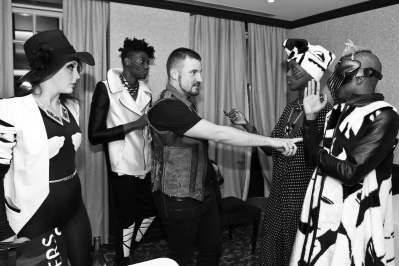 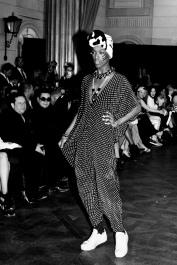 Following in the footsteps of virtually every creative professional developed in Toronto, fashion designer Evan Biddell is taking his brand to New York. Biddell jumped on the brain drain train with a vengeance showing an aggressive line of clothing at the Windsor Arms on Friday that was very obviously a big “FUCK YOU’ farewell to our fine city. Quite literally, there were big cartoon middle fingers decorating tits and gorgeous songstress Kreesha Turner‘s fine ass. The bubbly hand signage on all the clothes looked like a joke: an overtly sexual joke that conjured memories of Miley Cyrus masturbating with a foam sports mitten at the MTV Awards (a memory nobody should ever have to revisit). There was a delicate camo fabric shown that was very beautiful and the black and white paparazzi coats were bold, highly-covetable statement pieces. The addition of Cedric and Fritz of Azari and III added an element of showmanship that gave the show a vibrant energy. Add those beautiful boys to any mash-up tho and it will shine. Overall, I think we need to take back respect in this era of rebels without causes and continue to do our very best work. To make a mockery of the city that made you is very bad karma and just plain rude. But, major kudos to Turner’s bum in that white catsuit. For that, I will forgive and forget and look forward to what New York inspires in Mr. Biddell. x