I directed a new music video. It’s a steampunk acid barbie trip starring dancer Jenny-Anne McCowan. The artists are from Mexico City and the track was released on Controlla label. The video premiered yesterday on Como Las Grecas, a techno blog out of Amsterdam. They wrote (translated from Spanish):

“A collage as attractive as hypnotic, which plays with a multitude of Internet resources, a way to reuse the most common images, from memes to excerpts from videos of other times, to configure a unique and unique unit, such as the same track: Eclectic, overwhelming and sexy. Both visually and its sound, they easily transport us to another dimension. A candy that you can not miss. Enjoy it!”

I know. I know. It’s already January 8th! It has been a whirlwind holiday and New Year! I was on a deadline to finish my most recent directorial foray; an acid barbie music video for my friends in Mexico City who did ‘Pachanga.’ Look out for that video in the post to follow and take it as my excuse for the tardiness of my year-end wrap-up. 2019 was full of abundance on all fronts! And extremely busy. So let’s get to it. My top ten professional highlights of 2019:

Now, this was my #1 highlight last year in anticipation of publishing this book much earlier than October 2019. As it turns out, getting a book out into the world is a long and arduous process. I worked with the wonderful people at Bookart in Montreal and we brought the book to life. The final product ended up being 11″ by 16.5″ aka HUGE with 90 silk pages wrapped in a paperback cover. The book features the full photo series of The Goddess Array each accompanied by a sonnet detailing the myth of each Greek goddess. There is a perforated tear-out print of Nike Goddess of Victory in every copy numbered and signed in a very limited edition of 62. I am so pleased with the result. The presale saw half of the books go and the remaining half will be for sale at a proper book launch early February in Toronto. Keep an eye on this space for your invitation! The book is available for purchase at the following link as well: https://jennifertoole.com/Shop-2

2. Acceptance into the International Cinematographers Guild

The application process is long and the interview was stressful. I was sure I had bombed it when I got a call one day in April from the coordinator offering me acceptance! Then she said, “Are you available today?” And all of a sudden I was on the set of Titans! I worked on three big shows in 2019 which I will tell you about below. I have been a creative freelancer my entire working life and now, with a union behind me, I feel a new sense of support and security. It is blissful.

I guess I can spill the beans now that it’s all over Netflix. Mike comes back! 🙂 Working on the camera team of Suits was an incredible challenge for me as it was my first big show stint. I had a real learning curve to overcome. It was also my first foray into the lengthy hours film people work. 14 hour days are considered “not bad.” I was curious if I could muster the stamina and I did. It was a joy to work with Katherine Heigl, Gabriel Macht, Sarah Rafferty, Amanda Schull and Dule Hill. They are all seasoned pros and made the work easy. Rick Hoffman, however, is such a delight to be around and had me and the rest of the crew in stitches laughing all the time, which is the best medicine. He made the days shorter, that angel.

“Black Swan meets Pretty Little Liars in this soapy, drama-packed series featuring diverse characters who will do anything to be the prima at their elite ballet school.” – Google Reads

This series is going to be FIRE! I can’t talk about it as it isn’t out until Autumn of 2020, but be sure to watch it on Netflix when it does come out. The scandal! The drama! The dancing! I’m excited to watch. The Tiny Pretty Things set was a dream to work on and the camera team became my family for a couple of months. It was an experience I will never forget. Here’s a pic of me slating:

Now, I’m not a big fan of the show or the Hallmark channel in general, but it is the top rated station in the U.S.A. so millions of people love and appreciate it. Personal opinions aside, this show was a joy to work on. It’s a well-oiled machine being in its sixth season and the camera team members were relaxed and eager to teach, which was awesome. As my third show of 2019 it was eye-opening to witness and compare the wide variety of styles of lighting and shooting from three different DOPs. As I watch, I learn and soak it all up like a sponge.

I got the awesome opportunity to work with the elegant and hilarious Priyanka Chopra on this Blenders Pride commercial last winter. It was shot by the legendary DOP Robert Richardson, who’s CV includes all your favourite films like both Kill Bills, Platoon, The Doors, Natural Born Killers, JFK, Aviator, Inglorious Bastards, Casino, Django Unchained, Once Upon a Time in Hollywood etc. If you don’t know of him look up his catalogue and be entertained for days. It was quite the experience hanging out with Richardson for the week. He is one of Hollywood’s elite. If you buy me a glass of wine I’ll tell you the whole story. 🙂 Amber Fairlie of The Manor Salon in Toronto came through in a hair emergency and saved the day. Many thanks to P.M. Lisa Ericsson for giving me this opportunity. It was a blast! xo

The fashion bible published two of my submissions in 2019 to PhotoVogue. 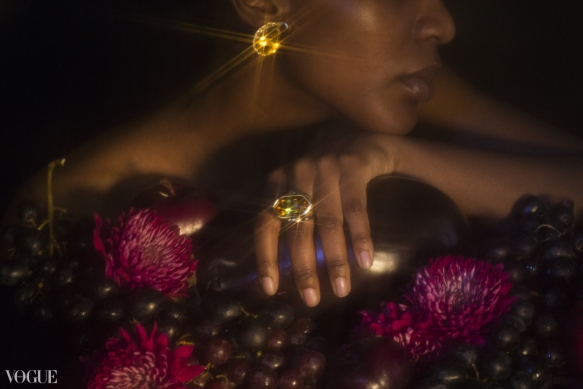 The second image is a black and white 35mm still of my little brother River Rae and his snake at an abandoned women’s penitentiary in Davie, Florida.

To commemorate Remembrance Day, the team at The Manor Salon put together a beautiful shoot featuring gorgeous headpieces by Fresh Floral Creations with an emphasis on the poppy. The photos turned out to be quite regal as the models balanced their enormous crowns while teetering on the side of a highrise. We added some couture into the mix and got some powerful photos. Take a look: 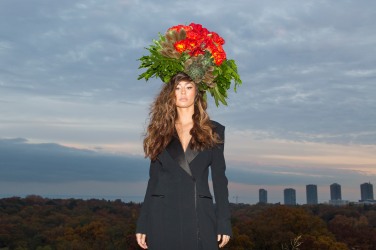 9. I AM IN THE WORLD AS FREE AND SLENDER AS A DEER ON A PLAIN

I received my first camera credit on the big screen for this sensitive look at the cold, dry experience of coming of age in the era of online dating. 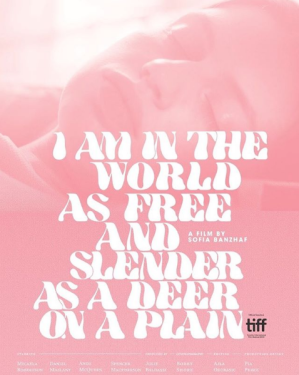 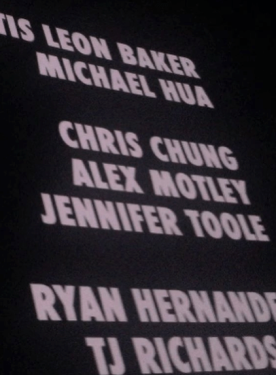 After discovering the pleasure a CBD massage candle can bring to aches and pains, I decided to make a bunch so that all my friends could have the same experience. Then I thought I would test my marketing skills with a commercial for the product starring dancer Alison Keery, and much to my suprise, the Goddess Massage Candles infused with CBD were a hit! I sold out and even had them carried in a store on my block. I had to put a stop to the whole thing as my focus is on filmmaking not candle making, although now I have something to fall back on if times get tough. 🙂 Here’s the ad campaign: 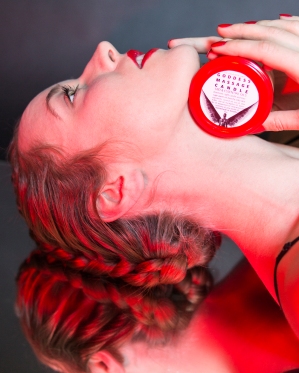 I am currently developing my first dramatic short. I wrote the script when I was 20-years-old and thought I would bring it to life on screen. It is a dark, abstract exploration of a young woman’s sexual perversions and their roots in her childhood trauma. Should be uplifting! I am excited to share it with you.

Here is a photo of me for good measure, taken after the Good Witch camera wrap dinner a couple of weeks back:

Here’s to an abundant and fabulous 2020! Thanks for reading. xo 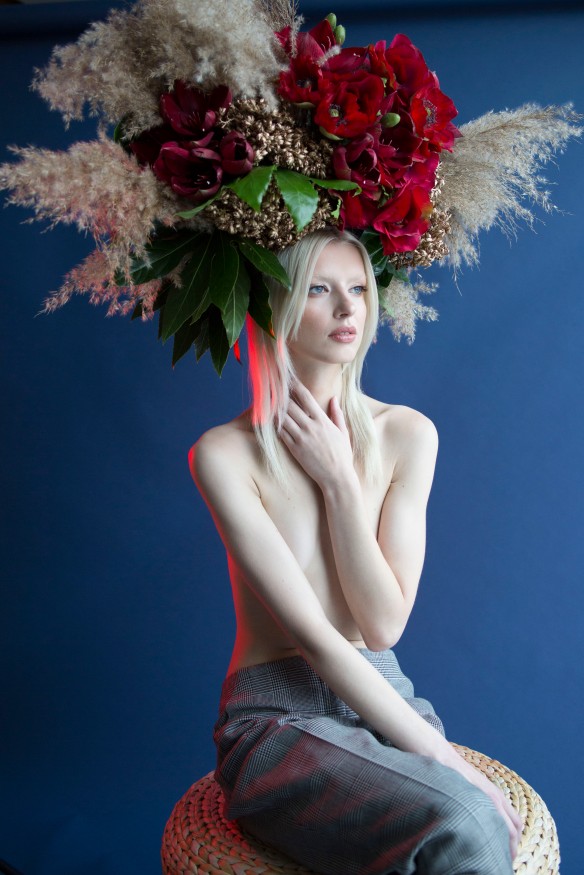 To commemorate Remembrance Day, the team at The Manor Salon put together a beautiful shoot featuring gorgeous headpieces by Fresh Floral Creations with an emphasis on the poppy. The photos turned out to be quite regal as the models balanced their enormous crowns while teetering on the side of a highrise. I do love a bit of danger. xo 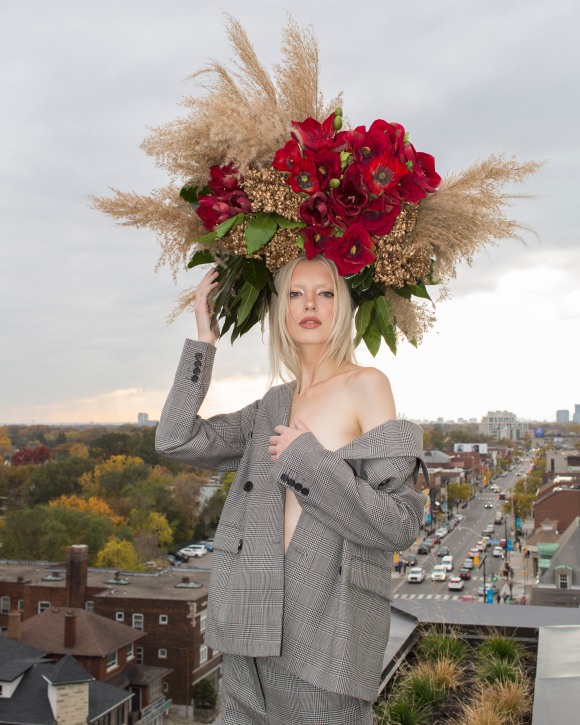