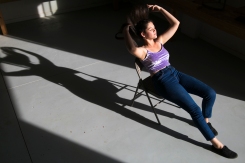 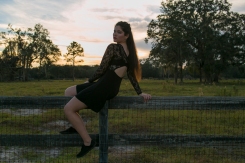 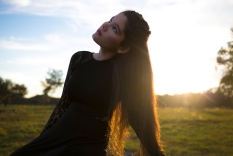 Cricket is an 18-year-old beauty Queen from a small town outside of Ottawa.  Her first experience with pageantry was the heartfelt, charity-oriented, supportive experience of a hometown pageant which she won.  This brought her to compete in the Top Model of Canada pageant which she then won.  After winning, the first thing said to her from the judges was “You better lose a bunch of weight if you want to get an agent.”  Cricket quickly became disenchanted with the modelling industry.  On her way to Egypt to compete in the Top Model of the World pageant she stopped by my studio to shave her head and do a photoshoot/interview for Herself.com via Caitlin Stasey.  Cricket’s plan was to wear a wig to all her fittings leading up to the pageant so not to be disqualified and although nervous, managed to get through the lead up without incident.  Cricket revealed her shaved head at the Top Model of the World and needless-to-say, she didn’t win.  Her interview and photos were published on Herself.com to hopefully inspire women to love themselves as they are. I shot this video throughout the head shaving process which became a rebellious ritual of sorts. Cricket wrote the accompanying poem to give voice to her actions. I found it to be raw and of a high quality. I hope you enjoy it too. xo